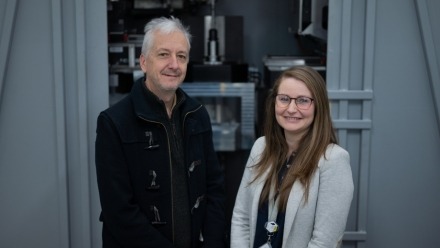 Using a new technique that she and her thesis supervisor pioneered, Aleese Barron has discovered that sorghum and pearl millet were domesticated several hundred years earlier than previously determined.

Sorghum is one of the most important cereal crops in the world behind rice, wheat, and barley. The earliest samples that exist of domesticated sorghum date back to 3700–2900 BCE, to a site in eastern Sudan called Khashm el Girba 23 (KG23). The spikelets (where the seed is attached to the plant) of sorghum are embedded in sherds of pottery that were excavated in the 1980s.

Although the sherds were dug up then, it was almost 30 years before methods became available to examine the spikelets in sufficient detail to be analysed to accurately determine their domestication status. That analysis indicated that at around 3700–2900 BCE, sorghum was somewhere in the middle of its journey to becoming fully domesticated.

Aleese Barron, a PhD student in the ANU School of Archaeology and Anthropology, has now overturned this finding, using a new technique she pioneered with ANU Professor of Archaeological Science Tim Denham. The technique has implications and applications not just for the cereal crops they’ve looked at, but for how researchers will analyse other organic and inorganic material in pottery and comparable items in the future.

How researchers currently examine organic material in pottery is by analysing surface impressions. Essentially, putting a sherd or a cast of the impressions under a microscope to magnify what the naked eye can see.

“The old techniques were not particularly elegant,” says Professor Denham. “Organic material pressed onto the surface of a pot sherd are often really hard to look at, and it might be a bit hit and miss.”

“So, people have been constrained by just looking at surface impressions on pottery. And I was thinking, well, using microCT we could just look straight inside it, because they do it for fossils, right, all the time?”

After discussions between Professor Denham, Professor Tim Senden (Director of the ANU Research School of Physics), and Aleese, Aleese took this on as her Master of Archaeological Science project. She examined rice spikelets in pottery sherds from Vietnam, and the account of that pilot study’s success was published in Scientific Reports, a Nature journal.

“Luckily it did work,” says Aleese. “That led to me deciding to do my PhD and being able to refine the technique, but also apply it to a wider range of crops and case studies.”

She uses the microCT machines in the Research School of Physics, collaborating with the Department of Applied Mathematics.

“Aleese had to learn initially how they did the scans and then how to process the data. But now she’s regarded as a super user over there,” Professor Denham says. “So she can run her own machine and do it all, all the way through.”

“The machines over there get such high resolution per sample size,” Aleese says. “I think the ones I’ve looked at were between 8 and 20 micron resolution, which is more than enough for these sorts of plants. A lot of commercial CT machines can’t really reach that sort of resolution.”

“Importantly for archaeology, this technique is also completely non-destructive in allowing you to look inside the sherds.”

Domesticated sorghum has been bred to be ‘non-shattering’: when its seeds ripen, the spikelets don’t detach from the plant as easily as they would on a wild plant. This enables farmers to more easily harvest the plant at the ideal time, and maximise their yield.

When the seeds, or spikelets, are forcibly removed in the harvesting process, they look different from spikelets that have detached “naturally” from a wild plant – and it’s these characteristics that Aleese looked for.

In the 12 sherds Aleese examined, there were 78 identifiable spikelets. She identified that 73% of these were of the domesticated type, and 27% were wild. Significantly, the microCT imaging revealed that the proportion of domesticated-type spikelets present was much higher than had been indicated through surface impression analysis by other researchers. MicroCT imaging was able to not only reveal six times more spikelets than was possible through surface impressions, but the quality of the data was also much better, in offering a three-dimensional view of each spikelet.

In their paper, published in the Journal of Archaeological Science, Aleese and her co-authors say:

Cereal crops traditionally take between 1,500 to 2,000 years to go from 0% non-shattering to a hundred percent non-shattering, Professor Denham explains. “The evidence we found is already quite far along the domestication curve, which means we now have to find earlier sites to find evidence of the initial experiments in domestication.”

Considering how far along the sorghum at site KG23 was in its domestication, and the estimated period when humans were occupying KG23, it’s likely that domesticated sorghum was introduced to the area rather than having been domesticated there.

“Another value of this work is that it’s COVID proof in the sense that we can look at old collections,” says Professor Denham. “We could reconstruct probably the whole history of domestication of these plants just by looking at pottery sherds that have already been dug. Which is cool.”

Understanding the past, shoring up our future

Understanding the history of agricultural plants is critical for a number of reasons. The first that Professor Denham raises has to do with how our knowledge shapes narratives that justify and motivate how societies treat one another.

“Our society has all these myths about the past, and I think they’re really unhealthy,” Professor Denham says. “In particular, social evolutionary perspectives – whether implicitly or explicitly built around the history of agriculture and rise of putative ‘civilizations’ – have been used to legitimize the oppression and marginalization of, as well as discrimination against specific communities, cultures and societies.”

“So a lot of my work in New Guinea originally when I did my PhD was about debunking the idea that agriculture only came from Southwest Asia, the Middle East, from China or from Meso-America – places where so-called civilization arose. Because actually, the New Guinea Highlands was also a place of early agricultural development and it had a very different kind of long-term social history.”

“For me,” Aleese says, “it’s important that we as archaeologists bust the myth that agriculture sprung from a few places, such as the Middle East, and that these are where civilization came from. There are so many ways in which people not only developed agriculture, but had different relationships with plants and animals.”

“So it’s important to me that we spread this idea that domestication is not the result of one group of people.”

Food security is another reason why these sorts of investigations are necessary. Commercial agriculture has narrowed the varieties of crops that the world focuses on, and in so doing, limiting the genetic variation of those crops. This has increased, Professor Denham says, “dependence on a very narrow margin.”

We see the danger in the case of the Cavendish banana, which is low in genetic diversity and at risk of being wiped out by a strain of Panama disease (Fusarium wilt). The Cavendish is Australia’s most commonly grown variety of banana, and accounts for around 50% of all bananas traded globally. Researchers are scrambling to develop a new variety of banana that will be resistant to Panama disease.

“Our interest is partly historical, but also partly of interest for agronomy in terms of food security and resilience,” says Professor Denham. “So our work is both looking backwards and forwards.”


The findings Aleese and Professor Denham made about sorghum are similar to that of the results they found in looking at pearl millet in pottery sherds in northern Mali dating to the third millennium BC where they also re-wrote the timeline of pearl millet’s domestication. Those results are published in African Archaeological Review, and their colleague, Professor of Archaeology Dorian Fuller from University College London, is the lead author of that paper.

Aleese and Professor Denham’s microCT work on sorghum and pearl millet were supported by a $7,000 CASS small grant.