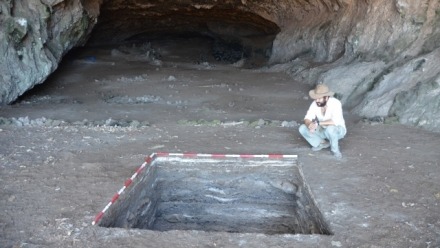 Our species embarked on the world’s first great maritime journey from Sunda (greater Southeast Asia) to Sahul (Australia and New Guinea) at least 50,000 years ago. In the process they settled Wallacea, the archipelago of thousands of islands lying between these two continental landmasses. By ~45,000 years ago they had occupied the larger islands, from Sulawesi in the north-west to Flores and Timor in the south and south-east.

This maritime migration involved competent seafaring technology and flexible economies as the new settlers were able to cross strong ocean currents and prevail on depauperate island environments. Following initial settlement, it appears that these island societies were stable for about 30,000 years, as there is no evidence for major technological changes or inter-island transfers. But, at the end of the last glacial phase ~16,000 years ago things changed dramatically. Obsidian from an as yet unidentified off-island source, appears in the archaeological assemblages of at least four islands in southern Wallacea marking the onset of the world’s earliest maritime exchange network.

At the same time new highly standardised items of personal decoration and fishhooks occur in the records. Social networks provide resilience for populations on depauperate islands, and marriage partners may have been as or more important than the resources exchanged across the network. New genetic evidence provides support for this, indicating a period of extensive demographic movement across Wallacea at this time. In this lecture I will explore the archaeological and genetic evidence for this remarkable human story thus far.

Sue O’Connor, FAHA, is a Distinguished Professor in the ANU College of Asia and the Pacific. Her research focuses on modern human migration, settlement and adaptations within the Indo-Pacific region. She was awarded the Rhys Jones Medal for outstanding contributions to Australian Archaeology in 2011, and held an ARC Kathleen Fitzpatrick Laureate Fellowship from mid 2013-2018.

She has written and/or edited nine books, and more than two hundred journal articles. Her books include The Archaeology of Sulawesi: Current Research on the Pleistocene to the Historic Period. 2018. Terra Australis 48. Canberra: ANU Press, (with David Bulbeck and Juliet Meyer); East of Wallace’s Line: Studies of Past and Present Maritime Cultures of the Indo-Pacific Region. 2000. Rotterdam: A.A. Balkema, (with Peter Veth), and 30,000 years of Aboriginal occupation: Kimberley, North West Australia, 1999. Terra Australis 14. Canberra, RSPAS, Australian National University.